We’ve had vampires, zombies and millions of aliens, but there has been a fantasy sub-genre that hasn’t been touched on in the last few years.  Since TV cult series Charmed and, ummm, Sabrina, The Teenage Witch, finished what seems like ages ago, witches haven’t been given the modern treatment. Mind you, this is from my limited recent memory… 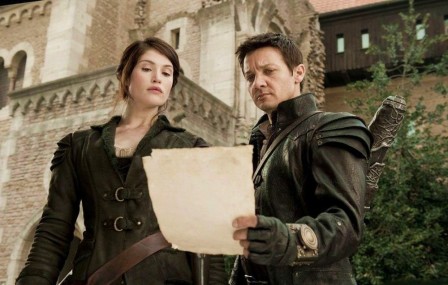 Hansel and Gretel: Witch Hunters is the latest film by Norwegian director Tommy Wirkola, whose probably most famous for his 2009 Nazi horror comedy Dead Snow. Based on the famous Brothers Grimm fairytale, brother and sister Hansel (Jeremy Renner) and Gretel (Gemma Arterton) are reinvented as a duo of professional witch hunters. They are hired to investigate a series of child disappearances and encounter a coven of powerful witches led by Muriel (Famke Janssen).

Now, this film is not supposed to be taken seriously, so there is no point in comparing it to the fantasy (or whatever is defined as fantasy) films of recent years.  In its slightly hammy script, predictable plot lines and cliché characters, it is very much a what-you-see-is-what-you-get film – wasting an opportunity to be…more than your average fairytale adaptation.
Seeing as it is practically depending on two A-list actors as the protagonists, punch-heavy fight scenes and CGI gore to pull the takings in at the box office, it isn’t that bad.  Arterton is quite impressive as Renner in throwing a punch…or headbutting some bloke right in the nose and that too-predictable essence of ‘true love conquers all’ is thankfully not overindulged here, but then again – this is a Brothers Grimm story.

Hansel and Gretel: Witch Hunters is one of those films where you can just switch your brain off for a couple of hours and just enjoy the intended nonsense. Just don’t expect rocket science.