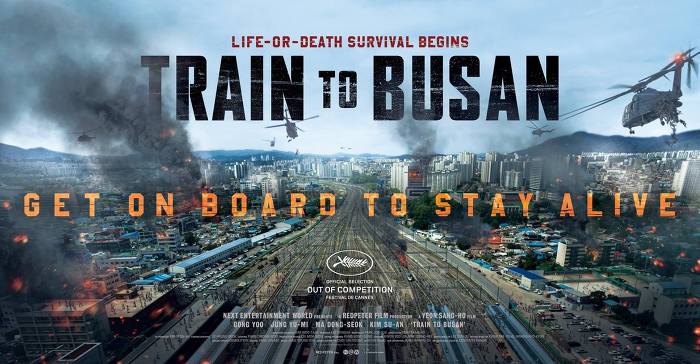 Since Halloween has been and gone, it may seem a little late to comment on a horror film. But seeing this has been making waves in such a seemingly short period of time, it is hard to pass up a flick that is, put simply, zombies on a train.

Train to Busan follows workaholic father Seok-woo (Gong Yoo) reluctantly accompany his daughter Soo-an (Kim Su-an) on a train from Seoul to Busan, so that she can spend her birthday with her mother. However, a last-minute passenger causes a huge zombie outbreak, threatening the lives of everyone on-board.

It is easy to compare this to Snakes on a Plane, due to the confinement and speed of the deadly threat. Why? There is no escape and once the danger is seen, the panic is immediate. However, unlike the Samuel L. Jackson fan favourite, fast-moving zombies with a taste of human flesh and a fast infection rate sound scarier than species that can be killed by a pack of mongooses.

Director Yeon Sang-Ho plays on the fear factor well throughout the film, as the idea of eating alive and being trapped sow distrust and paranoia among his characters. This consistent theme of selfishness, from Seok-woo’s workaholic attitude to the almost disturbing insensitivity of corporate executive Yon-suk (Kim Eui-sung), highlights the need for survival in such an event – more specifically, the need to look out for yourself, despite it coming across as pure callousness.

This is where the film shines – like zombie TV show The Walking Dead, Train to Busan focuses on noble characters whose actions (almost) restore your faith in humanity during perilous times. From grumpy badass Sang-hwa (Ma Dong-soek) to loyal cheerleader Jin-hee (Ahn So-hee), they show a goodness and consideration towards others, and the fact that they are physically there – instead of being at the other end of a phone – feeds their need to protect and look out for them, while forcing others to distrust them.

The core cast, including Dong-soek, Su-an and Yoo, are compelling to watch. As the film progresses, you end up rooting for them as you learn about and accompany them (literally) every step of the way. Yoo’s cold demeanour is softened by Su-an’s innocence and kind-heartedness towards others, while the sometimes tactless Sang-hwa is redeemed by his determination to protect his heavily pregnant wife. While Shaun of the Dead sees our heroes lulled into a somewhat false sense of security (aka The Winchester), Train to Busan sees them driven by their emotions to do something a little different – actually confront the enemy.

In visual terms, the film is mesmerising. The actual horror scenes are not overly gory, and the chase scenes are excellently choreographed and filled with pure adrenaline, leaving you waiting for the next twist and turn with bated breath.  Writer Park Joo-suk combines witty banter and heartfelt dialogue that doesn’t distract the audience from the fast-paced action sequences, which leave you feeling dazed and slightly paranoid afterwards.

Overall, Train to Busan feeds the fear of a zombie apocalypse and its constant action leaves you reeling afterwards. Although not one to watch when you’re running late on your daily commute.