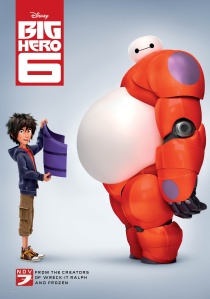 The move was inevitable.  Since Disney acquired Marvel Entertainment in 2009, an animated film featuring Marvel characters became a widely anticipated project and after the release of Frozen and its subsequent global domination, it is evident that the studio’s follow-on project had some large shoes to fill.  So Disney’s reaction? Make a superhero film focussing on two brothers and a squishy, inflatable robot.

Big Hero 6 is set in the futuristic city of San Fransokyo (San Francisco and Tokyo), where 14-year old Hiro Hamada (Ryan Potter) wastes his intelligence in creating robots for back-alley fights.  His older brother Tadashi (Daniel Henney) wants him to focus his energy into studying, so he takes Hiro to his robotics lab at the university where he meets Baymax (Scott Adsit), Tadashi’s healthcare robot.  As an accident at a demonstration kills Tadashi, Hiro realises that there is more to his death than meets the eye and with Tadashi’s friends and Baymax, forms a superhero team to take down the bad guy.

First of all, it’s another Marvel team.  With Fantastic Four, the Avengers and the Guardians of the Galaxy, Marvel are stretching to how many teams they can push onto the big screen.  In addition to the stereotypical characters that form said team (the shy nerd, the tough chick, the would-be stoner, etc)., it doesn’t really spark as much originality as the premise promotes.  Plus, it can be considered a traditional origins film, which – like most superhero films – has a formulaic plot.

But this is one small black mark on what is a very polished production.

As like all Disney films, Big Hero 6 captures the audience, no matter their age, with in-jokes a-plenty.    This culture clash of East meets West is brought to life with stunning visuals and a sea of neon lights to rival Akira.   The grabber for Big Hero 6 is its themes of brotherhood, not just between Tadashi and Hiro, but the latter and his teammates and Baymax, who is so simple yet effective in concept and design, not to mention the cuddliest thing ever.

With its straightforward story, it is easy to keep the heart of the film in its rightful place and allow the credible voice performances and the tip-top visuals to entertain audiences, while showing that Marvel and Disney can still pull off fast, action-packed animation.

Regardless of its…connections, Big Hero 6 is sweet and stunning and in Baymax, Disney has its new Totoro.